Do you know the different types of horse rugs?

Tried & Tested from Jess and Amanda

Note: This article is for reference only. If you’re worried about equine colic, always seek guidance from a veterinarian.

Colic in horses is a very different prospect compared to how it is for humans. A reasonably common condition, there are a few different forms that have varying degrees of severity, but as with all disorders in our beloved animals, they can’t tell you what’s wrong, which is why it’s important to know what you’re looking for.

In this blog, we’ll tell you all the important information you need to know about equine colic – what it is, the symptoms, what causes it, how to prevent it, and more.

What is equine colic?

Equine colic is an umbrella term that covers any abdominal discomfort suffered by your horse. Some of the major different types of equine colic are detailed below.

How dangerous is equine colic?

It depends on the severity of the colic. For less severe cases, then colic is little more than uncomfortable for your horse. However, if it’s a more serious case or is left untreated then it can become very dangerous. Most cases can be easily cured with the appropriate medication from the vet, but a small percentage may require surgery, or may even have to be put down in rare cases.

The severity of the colic is difficult to determine to start with, so it’s always best to call the vet as soon as possible to be on the safe side. Be aware that it can be dangerous for you too – if your horse is irritable and in pain then it’s more likely to lash out.

What causes colic in horses?

The cause of colic in horses depends on the type of colic. There are numerous causes, which can hopefully be diagnosed by your vet, but here are some of the main causes of equine colic:

Impaction colic is caused by a blockage in the intestine, which might be constipation or a foreign body that shouldn’t be there. This may also be caused by dehydration but can usually be sorted with medication. It may require surgery if the blockage can’t be shifted.

Spasmodic colic is one of the most common types of colic and is caused by a build-up of gas in the horse’s cut from excess fermentation. This can be due to a change in diet, parasites, or not having enough roughage.

Sand colic is caused by horses eating too much sand or dirt, and often occurs when there is not enough grass for them to eat, and especially if they’re not drinking enough water. The sand irritates and inflames the bowel but it can also lead to impaction if it builds up.

Other causes of colic

Other causes of colic in horses include having a twisted gut (which requires immediate surgery), tumours, and irritation and damage from parasites. Again, your vet will be able to provide more information about the different types of colic. 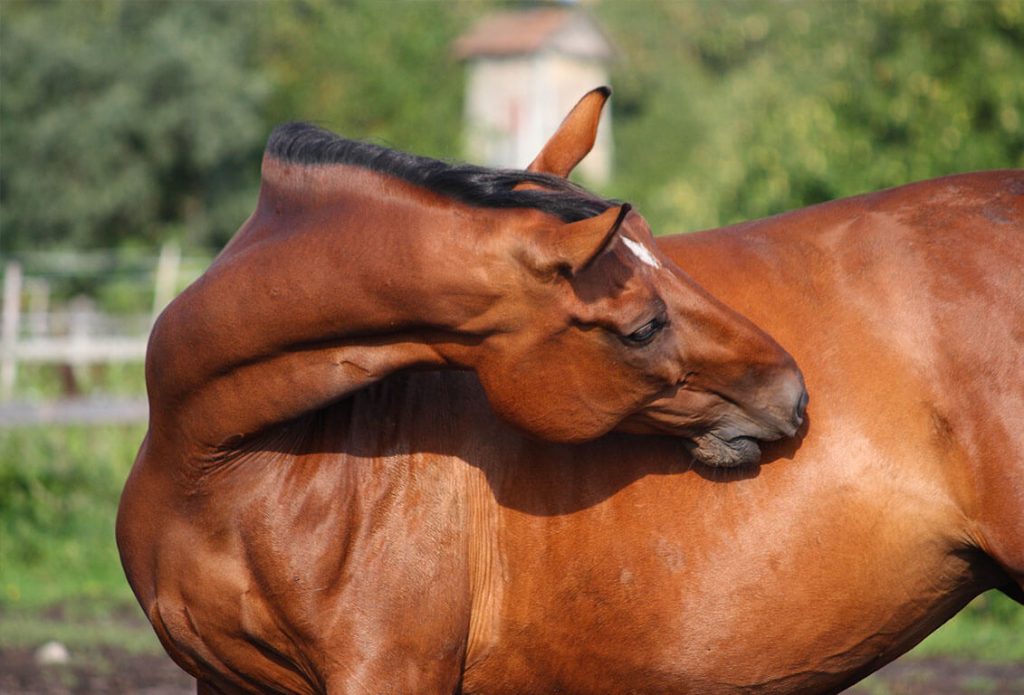 The most common symptoms of colic in horses include:

Symptoms of colic differ from horse to horse, and it’s always important to be aware of any unusual behaviour which may indicate a problem. If your horse demonstrates any of these symptoms, call your vet. While waiting for the vet to arrive try to keep your horse upright and moving around this will help stimulate gut mobility and prevent injury from excessive rolling.

How to treat equine colic 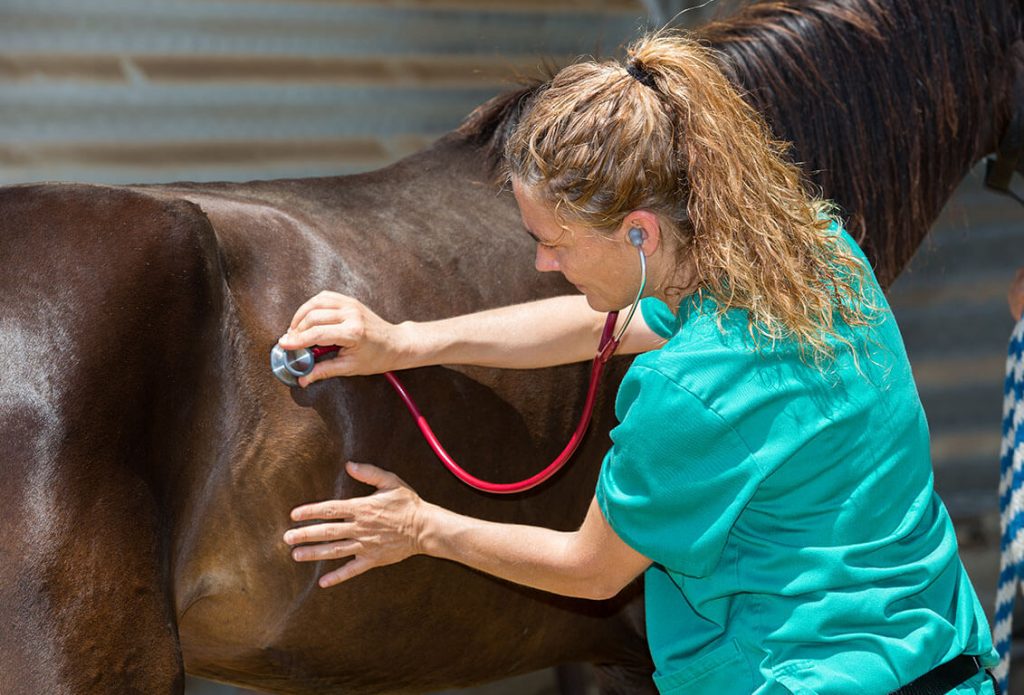 The most important thing here is to always leave treatment to the professionals, so if you’re worried your horse may be suffering from colic, give them a call. They will then perform various test and checks to determine the extent of the problem, including taking their pulse and temperature, checking their gut sounds (a lack of gut sound can indicate colic), and taking a look at their mucus membrane colour.

They will perform a number of other tests which may involve sedating your horse, and you’ll more than likely be asked a number of questions about your horse’s behaviour and diet. What the vet does then depends on the type of colic, but analgesics will always be used to lessen the pain.

Impaction colic may be treated with laxatives to remove the blockage, while a tube called a nasogastric tube may be fitted to relieve the pressure build up from spasmodic colic. For serious cases of colic (if the vet suspects a twisted gut, for instance), then they may decide surgery is required.

How to prevent colic in horses 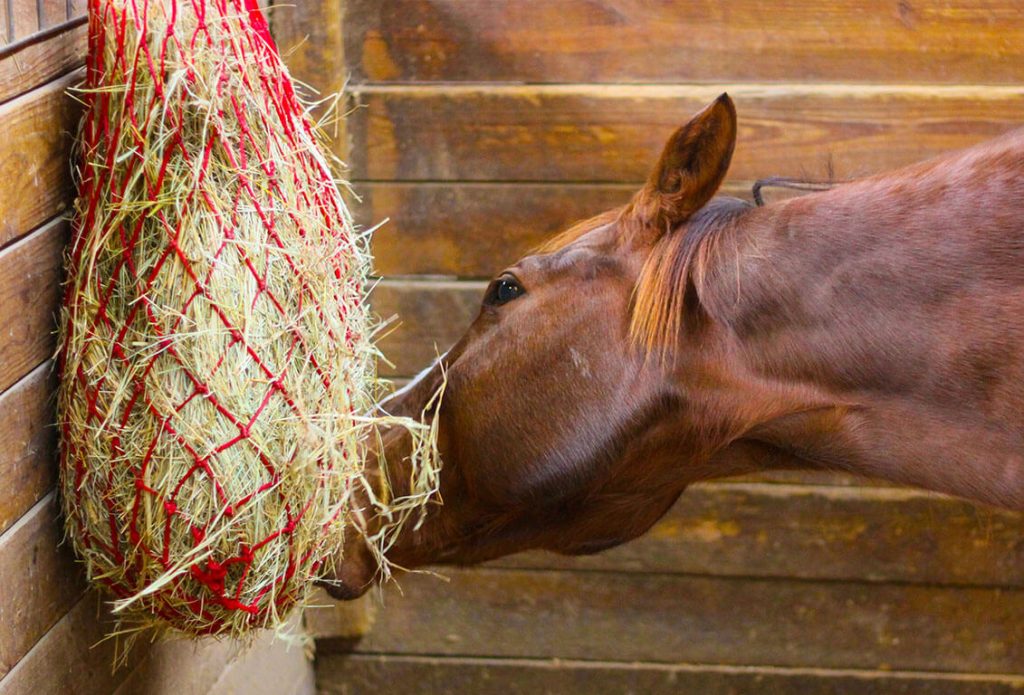 As with everything, prevention is better than cure. You can never 100% prevent it, but if you want to reduce the chance of your horse developing colic, here are some tips:

If you have any concerns about equine colic, then contact your vet.